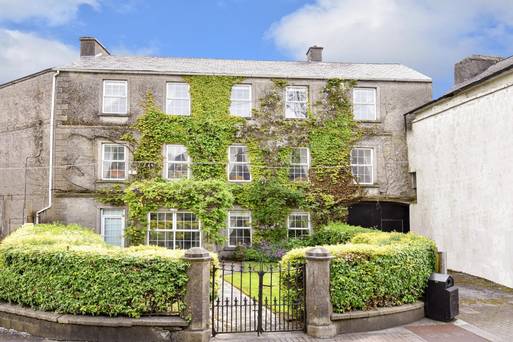 Beer was big business one time in Tuam, Co Galway. Charles Blake had a brewery at the end of Shop Street which, in 1837, was producing four or five thousand barrels of malt liquor a year, plus about 600 quarters of malt. That was more than enough to keep everyone in town feeling no pain, with plenty left over for export.

The numbers were reported in Samuel Lewis's Topographical Dictionary of Ireland in that year, and it may be reasonable to assume that Lewis's correspondent partook of some of the refreshment himself. He found plenty to praise in Tuam's "sources of recreation", which included a reading room over the market house, a public billiard room and annual horse races.

The brewery is long gone, however, having by all accounts succumbed in 1890 to competition from a crowd producing plain porter at St James's Gate.

Charles Blake made the most of his heyday though. He was Tuam's "foremost industrialist", writes the inimitable local historian Tony Claffey in the Irish Historic Towns Atlas series. He was Sovereign of the town in 1820, and "his brewery with its associated milling and malting establishments were the main industries in early 19th-century Tuam".

Some time around 1830 he built Bridge House, a handsome three-storey residence next door to his business concerns. From there he would have been able to supervise everyone's comings and goings, as it's on one of the four main commercial thoroughfares that radiate from the town square, 100 metres up the street.

In the post-brewery era, Bridge House has been a doctor's surgery, doctors being renowned for somehow always snapping up the most ivied and venerable houses in any town.


Check the weblink for further information, on this historical building of ours.
www.independent.ie/life/home-garden/raise-a-glass-of-beer-in-north-galway-35878997.html
The Palace Fields Estate - Tuam, Co. Galway